Being in a rural setting has its drawbacks. Internet service was spotty and unreliable when I was first here but now, in 2022, I wonder if it has improved. Is Starlink the better option? No desire to watch network news, only high speed internet with television, streaming videos, Netflix, YouTube and Prime Video at a reasonable price. What internet provider do you use and what is your satisfaction level. Just returned from Canada and Videotron is stellar in its service. I am in a rural setting in the 7th region. No cable, thinking of Starlink.Thanks in advance.

In order to answer your question, I asked a friend of mine who has been using Starlink for a while. He is in the 10th region.

He has virtually no problems other than a few weeks when it was unstable, but it seemed to have been caused by plugging it into one of his powerstrips.
He had issues before with printers in powerstrips too so maybe there is something to that.

It is still good performance for him. It does have a down side that there are micro interruptions which can be noticeable in realtime gaming and servers in the USA. He would not depend on it for that kind of stuff. For what it is worth, he is in whatsapp, ssh sessions, cpanel backends etc with no issues (like all day every day), no problem with youtube, syncing files up or down from onedrive or sync or google. Works with no problems in rain, super wind, below freezing, or etc. He has not had a major outage in a while. No data caps but more important, if you have one more device it will not crap out like it does on cell service.

So all in all, it works well for him. You should look into it. You will have a bigger upfront cost with the equipment, but it is reliable.

If one has no choice it is a no brainer.

Hope that helped you a bit.

Geonet. Based in Talca. EXCELLENT speed and reliability.

thank you bytesurfer, that helped a lot. The upfront costs are not in my budget but a friend told me Claro is pretty reliable in the 7th region and they offer a 200 GB should be enough for streaming videos. Their price is reasonable, about 18000 CLP a month and 10000 CLP installation. So I will try that and report back here.

We have fibre optic cable from Movistar to our premises, but Movistar is a joke company in terms of its customer service and ripoffs and broken promises. We have recently had our internet service cut after I refused to pay a bill which increased the price suddenly a large amount for no reason and refused to give an explanation or negotiate it, even all after giving me a rock solid promise that the bill would be 30,000 (per month) less what they said.

I put WOM which is just a plug in box with an antenna, but they only give 5-20Mb/s. This works for now as we have good reception for WOM in our area.

Starlink has recently cut the monthly fee from I think it was over 90,000 to 47,000 a month. I suspect this is a game changer and that Starlink is possibly the no 1 option for people that don’t have fibre optic cable to their house and this will include many of you in remote locations. It looks to be either faster, less expensive or better than all other non fibre optic options. Including offering more data, faster speeds or less expensive monthly fee vs all other satellite internet options that I´ve heard of.

However, you still have to cough up the 430,000 installation fee, so you need to make sure it is going to work before getting it, although there is I think a money back guarantee for the first so many days. It also looks like you have to order it and install it yourself, although it looks like the hardest part of that will be getting it on the roof. Don´t expect someone to be able to come out to your house.

As I have been considering putting in Starlink, I have done a search online and read some reviews and watched a few videos.

It looks like it will probably work well for most people in Chile that have unobstructed views of the middle and high part of the sky, although it is still early days so hard to be sure.

It looks from online reviews/videos like Starlink has similar speeds to fibre optic at around 50-200Mb/s including in Chile, and has a stable connection that is good enough for Netflix and video conferencing at least >90% and maybe 99% of the time but probably not >99.9% of the time (assuming no trees). It isn´t good enough for serious, competitive online gamers where even a 1-second drop out is a problem.

There is also a facebook page for Starlink users in Chile.

EDIT October 3rd, 2022: I edited this post as I made some mistakes in the original one, and I explain my edit in a later post.

thanks Mendoza. Sounds like the hype about Claro was only for cable and we don’t get the fiber optic cable this far out. Funny, I remember admin saying ithe fiber optic cable was only a hundred metres from his house. He is in Los Lagos but closer to a town than I am.Wonder if he ever got it.

Friend of mine, rural setting near Chillan has a techie that tested her yard for signal strength and then installed the appropriate chip (I think it was Moviestar) that had the strongest signal in a box?router?and they got the unlimited data and watch Netflix a lot. Around 30,000 a month. Apparently the techie is a private installer and they pay him each month and he covers the cost with the different internet providers. Am waiting on more info about that. The installation fee on Starlink is cost prohibitive. for me.

Wow nice that starlink cut the monthly fee. Its basically competitive with a movistar 4g plan now. Yes the initial fee is hard but probably a good investment. Starlink is cutting edge satellite and not 5g as some people think it is

Before fiber became available here in my neighborhood, a number of homes here used a wifi service from a small private company. It had unlimited data, the speed was ok. I forget what my numbers were from back then. Nothing like fiber. The cost was around 30000 per month.

There is a company based in Chillan that offers a similar service , am considering how important netfix is, in the grand scheme of things.

Ordered Starlink today after a good report from a neighbour who has had it for 1 month with zero problem.

WOM has been OK so far but we noticed the slower speeds after being used to fibre optic cable. Also, as I work from home, it’s safer for work to have two separate connections.

I previously stated “It looks like you need a clear view to the horizon, especially to the north/equator.” That was all wrong I am sorry. I will go back and edit my mistake so as not to have false info on here. Firstly, the views to the north are required in the northern hemisphere. In the southern hemisphere it is views to the south that matter. My reference to “especially…the equator” was just wrong.

My reference to clear view to the “horizon” also appears to be wrong.

As far as I can tell:

low obstructions (say at at an angle of 10 or 20 degrees) don’t matter,

obstructions at 30-35 degrees possibly aren’t ideal but are not a huge problem? but not sure

Where 0 is the horizon and 90 is directly above

This is rough. Use the app to check for your specific location as may vary by latitude, or do your own research

Whats needed is just a clear view of the sky to capture satellites at an elevation of 30° or greater. The antenna doesn’t need to be orientated in any particular direction.Having said that, with such a massive constellation, antenna positioning ought to be completely non-critical. 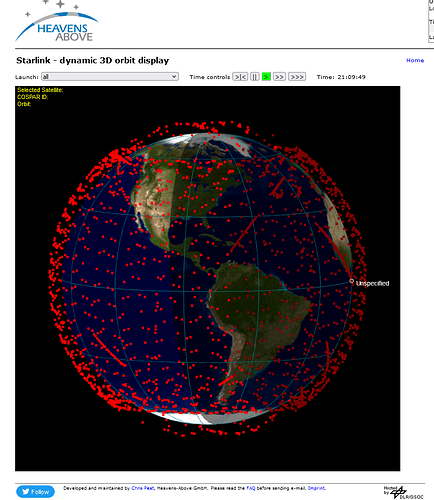 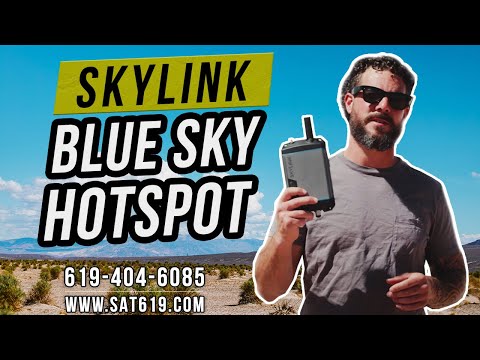 Looking into it some more, Skylink can do a lot of things other than just surfing the internet. For example the device featured can do VOIP phone calls with a push-to talk feature, replacing Mobile Radio and Cellphone services in areas where current coverage is non existent, impractical, or hugely expensive. (An INMARSAT call used to cost USD $10 a minute the last time I used it, 15 years ago)

Interesting, feargle, but limited internet use would not work for me. Preppers would like this.

but limited internet use would not work for me

What do you regard as “limited”?

Hi feargle, I would like to be able to watch Netflix or documentaries nightly as well as using the internet for research and social connections. The animal caretakers would like the same access (their house is only 10 metres away) so I imagine I would need a repeator thingamajig. My whole pension goes to caring for the animals at the sanctuary presently 9 horses, 7 dogs, 7 cats and the caretaker’s salary. Costs have risen but my pension has stayed the same. A company out of Chillan offered me a system with unlimited internet but it was still too pricey. Of course the Starlink is cost prohibitive but perfect.

Am trying to get animal people to help with expenses with my patreon page (even a tier for those who want to run an animal sanctuary). I will share the link with anyone who messages me. For as little as 3$ CAD a month, patrons can access my short stories and visit the sanctuary when they are nearby and that memebership fee will go to caring for the ones without a voice. No corporate costs, no board of directors, no advertising crew… just me and the caretakers. Some of the horses were on their way to the slaughterhouse. Dogs were street dogs, cats were homeless also.

Of course the Starlink is cost prohibitive but perfect.

Yeah, understood. I believe they announced reductions in the monthly tariffs for Chile recently, but even so the costs are still pretty steep. Maybe Mendoza can provide more details.

Another option would be to set up a community sharing service, distributed using wifi. There was a lot of talk about doing this a few years ago, but it all fizzled out.

Another thing: the satelites downlink to earth stations, and from there to the internet via fibre optic. I imagine the Chilean service is based in the Central Region, so a major seismic event there could still take the service out…

I got more feedback from my friend about his Starlink use.

He has no problem doing anything other than ms dependent things, like real time gaming. not a big loss for him.
He often does multiple things at once…downloading archives, watching youtube, in a Whatsapp video call.
All with no hiccups. He doesn’t have Netflix but with 100mbs+ down he doesn’t see why it wouldn’t work. And he gets an upload speed of 30m.

I thought I would mention this.

I am going to try the Chillan company. Will submit feedback after a month of using their service…