There are some news reports about people that Boric has pardoned from the Estallido, but most of them just list the people without explaining any details.

I found some details here for each case 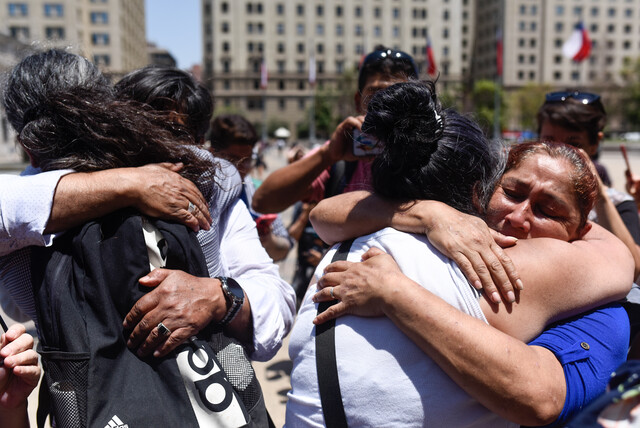 This just seems like a bad move overall. I just hope that the president is able to deliver security, and stability in this upcoming year.

Overall it looks dubious and I wonder if it goes back to needing to reward the support of the Communist party.

I bought a newspaper yesterday to get some more details and some of the 20-22 year olds (perhaps being 18 year olds at the time of the offence) got 5 years in jail for throwing a molotov cocktail or some other burning object. In the context of military having committed many abuses prior to some of these crimes, and depending on whether the object was thrown at someone or just into space to be able to defend a territory,5 years may be a bit much (assuming no serious injury occurred) and if the indulto is in reality just a way of reducing that sentence from 5 years to say 2 it might make sense.

However in virtually every case you would need more information that what is easily found in the public domain to be able to make a firm judgement. 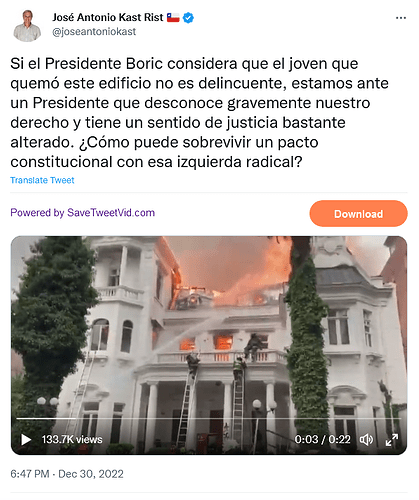 Being young and being a delinquent are not mutually exclusive states, despite what Boric says.

According to my husband, to be given five years, there had to be some extenuating circumstances. Two years would be the sentence for just throwing a molotov cocktail into an unoccupied space.

I figure they were found guilty, the judges sentenced them according to sentencing guidelines, they should do the time. People who committed similar crimes at a different point in time have to complete their sentences.

Boric is showing exactly who he is governing for. I think it is going to backfire and his negative poll numbers are only going to get worse.Crime/security is one of the most important concerns for people right now. It’s like a slap in the face to pardon people who burned down the country.

It’s also doubtful whether a President should even have the power to be able to pardon people. The same sort of powers seem to exist in the US and various other places.

A pardon is a government decision to allow a person to be relieved of some or all of the legal consequences resulting from a criminal conviction. A pardon may be granted before or after conviction for the crime, depending on the laws of the jurisdiction. Pardons can be granted in many countries when individuals are deemed to have demonstrated that they have "paid their debt to society", or are otherwise considered to be deserving of them. In some jurisdictions of some nations, accepting a pard...

it says in Chile a pardon “only grants the remission or the commutation of the sentence; it does not remove the condition of having been condemned” (that is a copy and paste from wikipedia, I haven’t checked against original source). So Boric’s power is to reduce the sentences.

And then some of them appear to have been pardoned because the conviction was questionable in some way.

If one of these pardoned criminals commits some terrible crime in the next year or two, in the time they would otherwise have been in jail…that is not going to play out well for Boric at all.

Such “indultos” are rather conspicuous evidence of shameful nature of this Boric government and its growing alliance with the criminal classes of the country.

Small wonder Boric is showing very low approval among the citizeny: 36 percent according to this CADEM report. 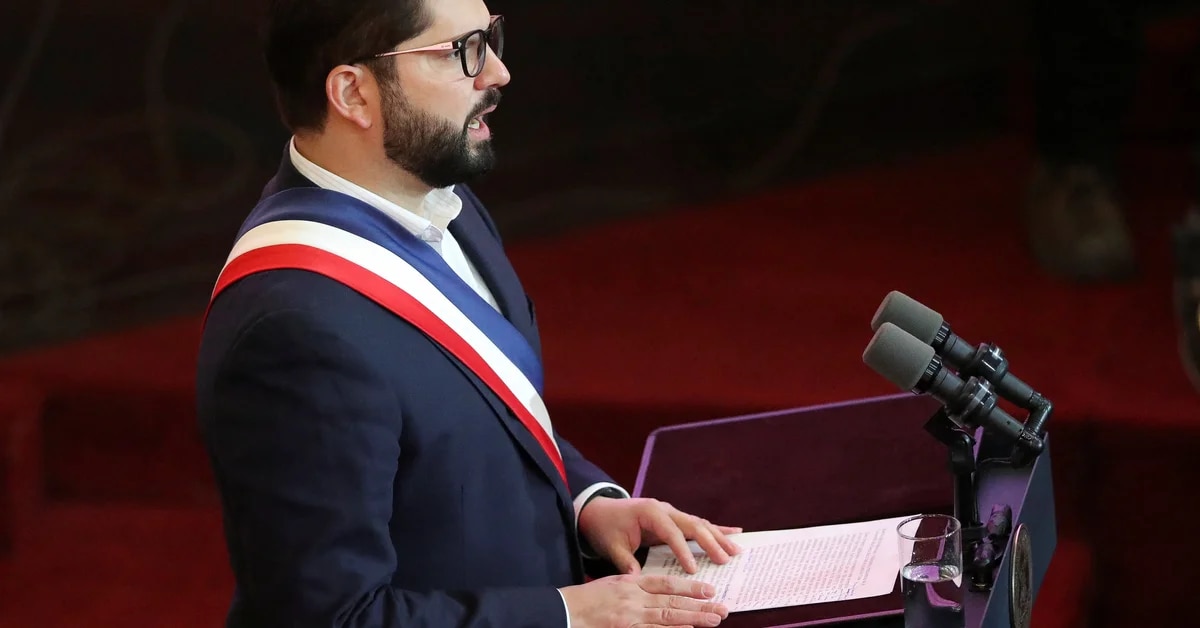 I think that if more people had access to the new spate of policy proclamations going on within this Boric government, anyone with significant resources and the capacity to leave would be making plans now to gracefully abandon this country.

To be clear, 36% was his average throughout the year. It started at about 50% in March, was mostly between 40% and 30% mid year, and ended the year stuck at around 30% in November and December. According to CADEM.

The last CADEM result was based on asking people 28-30 Dec and I think it was mainly the 30th that this was in the news although there was some discussion/expectation of it earlier, so the pardons may not be factored in the last survey.

Not to mention 500 lukas per month for the rest of their lives (most in the early 20s), the small business owners, layed off workers, and all of us who pay for the destroyed public infrastructure, $0.

I know one who left beginning the process with a huge cash transfer back to the States days after 18O.

This story continues. He just keeps making it worse and worse for himself. He said he has doubts about Mateluna’s trial. The Supreme Court and the Prosecutor’s association had to put him in his place. I mean, he’s not a lawyer. Beyond failing his law exam twice, he never completed his mandatory internship (I have inside info on this). Now, information about some of the lovely young people he pardoned is coming out. When asked about that today, he completely avoided giving an answer. 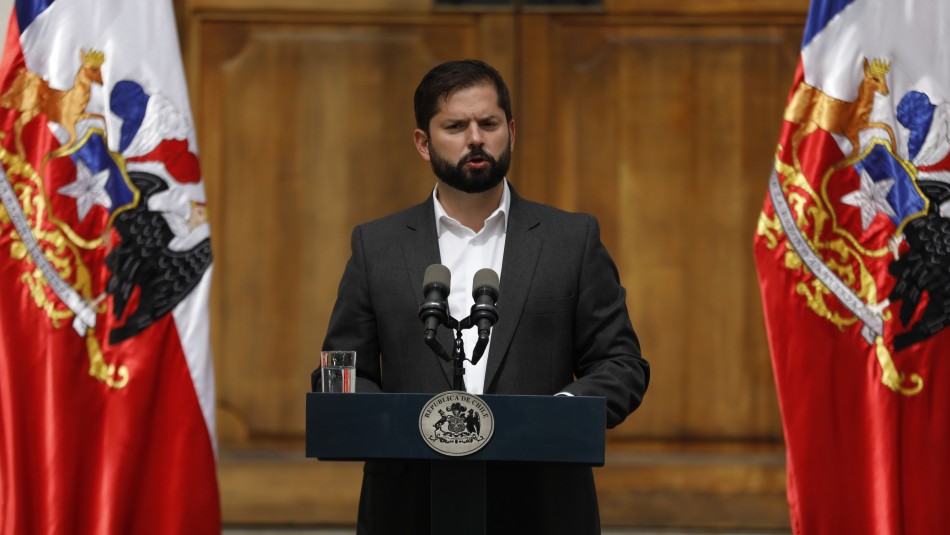 It´s not clear to me whether the errors made on the indultos mean someone people that got a pardon shouldn´t have. Or is it some other error? Does anyone know? (sources not speculations on this one please) 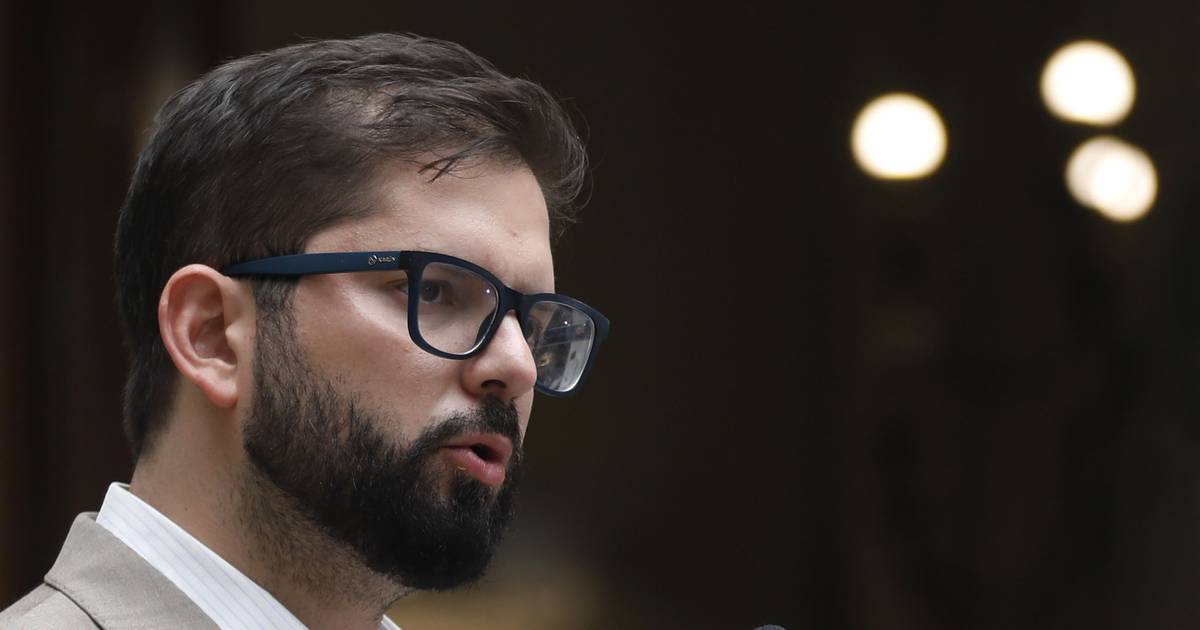 This is clearly not a good week for Boric and the government and arguably the first time it is a more serious and perhaps deserved criticism than other criticisms during the year, most of which I can´t even remember what they were about.

I still think we need to put this in a certain context though - this isn´t really that major. When the next elections come round, this will likely have been forgotten about as some much bigger issue will likely have come around by then.

Maybe this is what is being referred to.

Basically, five of the “jóvenes no delincuentes” could not be pardoned normally because they are repeat offenders and hadn’t completed two thirds of their sentence, which is required to pardon a repeat offender. The government had to invoke a special exception to pardon them.

mm. Indeed. And one of the people pardoned stole from a supermarket? Not exactly freedom fighters resisting military abuses then?

As usual, the more I learn the more I feel I still can’t make a judgement without further missing info, but overall it smells bad.

Boric down to 27% approval in the latest survey from CADEM today/yesterday, and it was based on surveys carried out Wed, Thur and Fri before this really blew up on Saturday I think it was with the Justice Minister resigning. So the survey next week may even have a little further to fall.

Maybe not though, or not much, because the disapproval has surged to 70% which is his worst yet at CADEM. A fair chunk of the undecideds broke in that direction and there are hardly any of them left now.

Perhaps the Presidential pardons should be approved or rejected by either the senate, the deputies chamber, or a citizen’s assembly. That might be a good balance. Not sure about eliminating altogether because occasionally you get some ridiculous decisions, although I’ve seen that more in the US than in Chile.

Could Boric not have just said to the communists - and then made it public what he had said quickly after - if I am elected President, I will let you submit a certain number of cases for pardons, but all pardons from the social crisis must be approved by >50% of randomly selected citizens in a citizens’ assembly.

The communists wouldn’t have wanted to publicly say that they are undemocratic, so they would have been forced to accept I guess? Communists have to respect people power/democracy, or at least pretend to before they get into power.

And then the communists would have submitted a list of names, the people would have rejected nearly all of them expect for 1-2 special cases, and all would have been right with the world…

Boric getting on his moral high horse on Twitter regarding the “insurrection” in Brazil. Hilarious how he has the nerve to condemn “cowardly attacks on democracy” when he has just pardoned terrorist thugs who threw petrol bombs at police officers during a violent insurrection against the Chilean government. 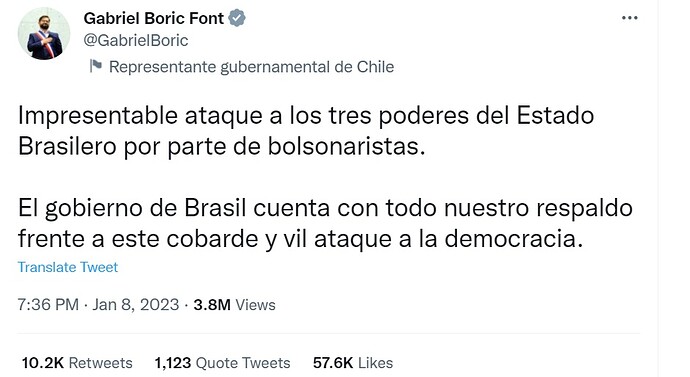