Local report (Talagante): Here the sky is not quite grey, not quite blue, sort of in between. More blue overhead, more grey to the horizon. The smell of smoke/fire is permeating everywhere but not strong smell. However when I go outside I very slightly cough and my eyes are slightly irritated.

Starlink internet unaffected by this.

Visibility about one kilometre.

Must be quite big fires as I think the fires are tens of kilometres away from us.

Will try to paste ONEMI recommendation into this post

You can also see here: https://twitter.com/onemichile 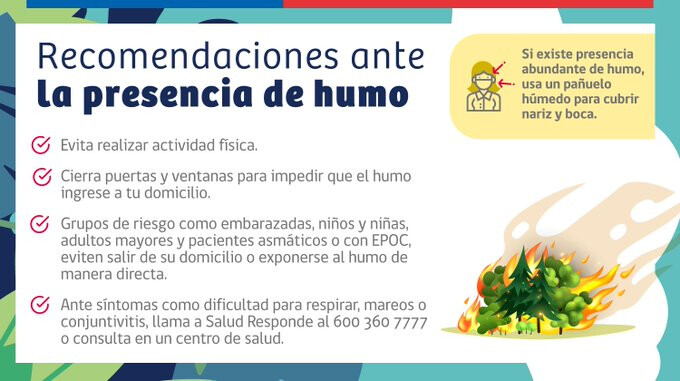 Here in Talagante the sun is still bright enough that you can’t look at it, in Maipu a couple of contacts report not being able to see the sun

Here the air is a greyish yellow and you can definitely smell the smoke. I have severe respiratory allergies, so the smoke is really irritating my respiratory system.

The past two days, there was very visible offshore haze reminding me of that Eagle’s song when watching the sun set and yesterday, my phone went nuts with the ONEMI warning for Santo Domingo. There was a visible haze smoke layer that hung low over the Rio Maipo valley and surrounding areas south and east and by dusk, towards the east, the sky was black like an approaching gigantic storm front. During the day yesterday, the sky was blue no smell but when I went to the HiperLider, in the shaded entrance you could see actual ash particles swirling around in the coastal breeze. I have bronchitis and obviously scared nearby people and saw their worried COVID paranoia looks with those that had masks pulling them tight when I had a rare but unexpected coughing bout inside (after reading the other posts, I am convinced it was microparticles form the fires).

About the ONEMI phone alert, only works for phones bought inside Chile from authorized vendors. It will have the info on the box that it has this capability. The Santo Domingo fire was quite a number of kms south of me and not visible at all from my vantage point and I probably picked up the alert because of my line of sight to Santo Domingo across the Rio Maipo estuary. This is the third time Ive had a phone alert. The first was after the Coquimbo quake, the second was the first long distance overseas tsunami scare from a couple of years ago. For some reason, I did not receive the more recent second oversea tsunami nothing burger scare and reported it on the ONEMI website. At least there is some government actually doing work as I did pick up yesterday’s alert. And they edited the message to the initial alert screen, adding that it was a “Presidencial” ONEMI alert instead of the past message being an alert from ONEMI

better here now, I can see the mountain ten miles away, and can’t smell the smoke
Maipu contacts report improved but still hazy

Here in Buin it has improved somewhat too.

These interactive fire maps are common in the US and Canada, a public service. Why did they stop them here??

It’s what used to be called a SNAFU. Just imagine what the next big quake is going to be like with this lot in charge.

According to CONAF these fires are nearly always caused by human activity:

We have clear skies in the Norte Chico, nothing much to burn round here

This supposedly is a real time map

I haven´t checked how accurate it is, but it was retweeted by Energy Minister Diego Pardow

Another fire yesterday in the Isla de Maipo area. At first I thought it was quite close to us, like a mile away, but then I drove a mile and it looked like it was right next to there as well, that’s when I realized it was actually a very large fire about 5-10 miles away.

The smoke rose in a mushroom cloud formation a little similar to a nuclear bomb type formation, and fire was reported at 60-65 hectares.

Today is only the second cloudy day of the month, and both were the day after the fires. I suspect the fires seed and create a cloudy day the next day.

We have clear skies in the Norte Chico, nothing much to burn round here

That is why the air was so bad yesterday, then. We are pretty close to Isla de Maipo.

should be better today. raining now. my theory is that it rains on one day per summer on average so this could be that day.

has definitely been the rainiest year since I moved here in 2014.