I figured we could use some pet pictures, so I will start. This is our dog Brünhilde right after being rescued. She was so tiny that I made her a jacket out of a sock! 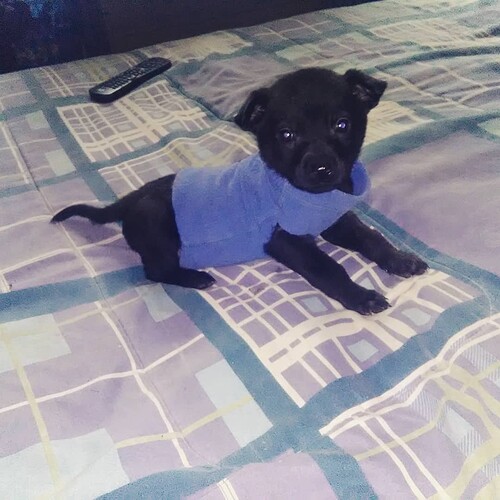 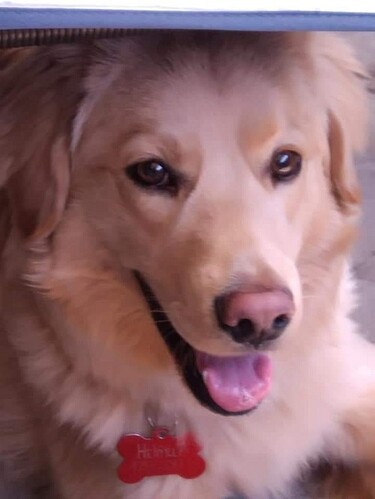 Actually not, just a regular cell phone camera with no filter. He should be a dog food model. It’s amazing that someone abandoned a dog like that. 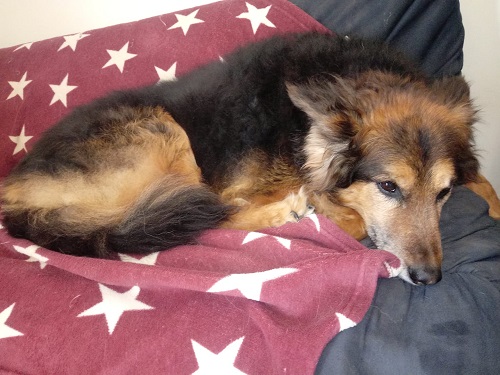 This is our old lady Jade. She’s 14. Sadly, her arthritis has gotten worse in the last few weeks, along with her other chronic conditions. Tomorrow, the vet will be doing a house call so we can say goodbye.

So sorry gringalais. They leave such a huge hole in our hearts and lives when they leave. I think they are angels, sent here to teach us kindness. Thank you for all the years of kindness you gave to Jade. <3

Three of the sanctuary dogs on a summer day 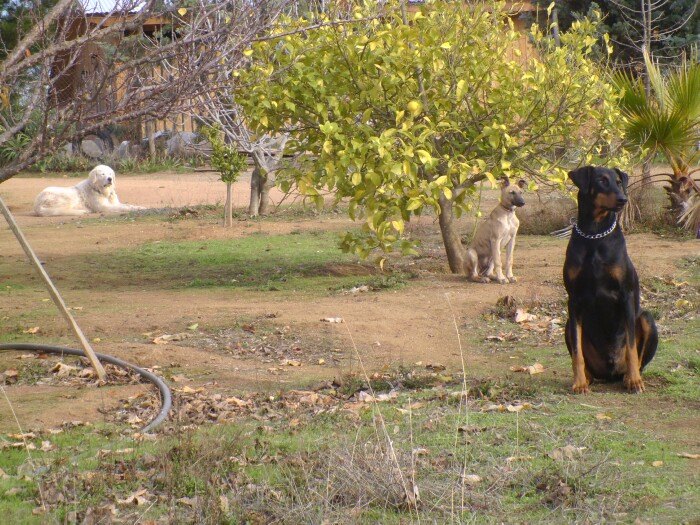 Ah i see you have one of those white fluffy dogs famous for protecting prey animals. Kudos!

Casper was a Pyrenees Mountain dog, loved to surveil a large territory. Happy go-lucky, smiled a lot, good natured, affectionate and endlessly noble. I found him hitch-hiking on a highway, and you could say he hitched a ride into my heart.

Here is a short story about Casper. I have a patreon page where I share all my short stories ( most about animals) and the minimal subscription costs help me to pay for the food and care of all the animals at the sanctuary, Santuario Cielos Azules. All subscribers are invited to visit and meet the animals they have helped. Now there are 9 horses, 5 dogs and 6 cats and I am trying to make ends meet with my small pension. I will attempt to share the Patreon link on a followup post. Hopefully, as a non-profit rescue org, it will be allowed. Enjoy the story mem

Casper and the horses

I was part of something terrible and beautiful yesterday.

The workers had been excavating a new well in the upper north meadow. In another meadow, other workers were tearing down the old barn and putting up a larger open barn.

The horses were not happy. Their world had changed. Now harsh machine noises replaced the bird songs, ugly bags of cement and rows of pipes covered the patches of wildflowers. Their barn was a skeleton of itself. Their water troughs had been moved every day to different locations.

The horses had just finished eating in the north meadow. We had to convince them to go to the south meadow away from the construction. Rodrigo went behind them and I led the way to the lane between upper and lower meadows. This lane was the size of a narrow logging road, olive grove fences on one side, orchard fences on the other. The incline was steep.

I led the horses to the top of the lane, walking backwards and talking to them, convincing them the lower south meadow was the place to be. At the top of the lane I stepped aside and said "Ready, Set, Go! ". The lane is their racetrack. They like to race each other to the bottom. I pretend I am the person with the flag signaling the beginning of the race.

I turned and looked down the lane. To my horror, I saw Casper, standing tilted like a drunken ghost, in the middle of the lane, halfway down the hill. Casper is a 16-year-old Pyrenees mountain dog. He is arthritic and deaf. He stays in a large fenced area around the houses but a worker had left a gate open.

The horses began to race down the lane, four abreast taking up the whole width of the lane, the last three following, nose to tail. They were a stampede; I could not stop them. There were seven horses barreling towards him. I screamed Casper’s name; I doubt that he heard me. But Casper must have felt the earth tremble from the hoof beats of the seven horses thundering towards him. He must have known he would never make it to the fence line. I saw him lie down in the middle of the lane, in silent surrender to the inevitable.

I closed my eyes, pleading with God, the Universe, whoever was listening, to let Casper live. When I opened them, I saw the horses part, like a river parts for an island. With the graceful precision of a ballet troupe, they shape-shifted from a stampede of four abreast to two orderly lines and raced past on each side of Casper. The dust from the lane formed a cloud around Casper’s body but when it settled, I saw that he was alive and uninjured. Just brown from the dust, instead of his usual moonlight color.

The horses recognized Casper as an extended part of their family. Not hurting him was more important than who won the race.

So that was the most terrible and most beautiful part of that day.

Here is my patreon page where I share my short stories, most about animals, some have been published. Subscriptions start at 2.50$ US (3.46$ CAD). and this helps me cover the costs of caring for the 9 horses, 5 dogs and 6 cats presently at the sanctuary, El Santuario Cielos Azules, in the Seventh Region. There are 17 stories to date, a new one is posted every 2 weeks or less. One story discusses whether dogs are capable of deceit and Casper is featured again in that story. Hint… he is the gullible one. www.patreon.com/sharylthompson

You are a very gifted writer hlf

my family and I really enjoyed the story. My children are animal crazy and particularly horse crazy.

Thanks mem, the first story on my patreon page is part of a trilogy called Sanctuary Tales. It is about a quirky group of chickens who came with the property when I bought the land for the sanctuary back in 2012. Your kids would probably like these child friendly. stories. I really need the subscriptions to help cover the costs of running the sanctuary but 3.46$CAD, (or in US dollars that comes to 2.50$US ) per month is in most people’s budgets. Also you can subscribe, read all the stories to date and then cancel your subscription if the cost is a hardship. Then in 6 months, resubscribe and catch up. It defeats my purpose of having a steady revenue flow to cover the costs but it makes my heart feel good that the stories are being read and bringing smiles. Yes, there are horse stories also, including the story of the first horse rescue which was also published in an equestrian magazine. All subscribers are warmly welcomed to visit the animals they have helped. Teaching children kindness is one of the greatest gifts you can give them, and the world.

Also, I am always looking for the next CEO of the sanctuary, am not getting any younger. That is addressed in membership level 5 on the patreon page. Here is the link again for those readers who may have missed the earlier link. Sharyl Thompson for El Santuario Cielos Azules is creating a safe place for those without a voice. | Patreon