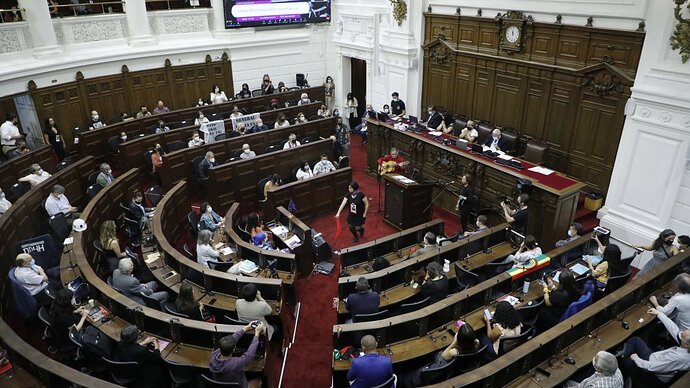 Would be good to hear about the stuff that is usually not discussed, like the expropriation of private property and businesses both by government and criminals acting under the ideology of the government. As for the intolerance of the left towards those who think differently, how about the acts of violence targeting their unwashed “enemies” or the quotas for food rations based on political color, etc.?

Is this president that much different from Bachelet?
Does this millenial who goes along to get along really smack of Allende?

Who hasnt watched election nights for DECADES where the favored candidate lost and then everyone turns to each other and mourns “there goes the country”. Too many times and then its almost always just more or less of the same

We shall see, first time the commies have a direct “in” whereas the Concertacion and DC types always drew a line not to cross in regards to the adherents of the lowest respected organization in the country. And with the far left extremist CC which now is backed by the Executive, they could abolish the Senate and/or call for new legislative elections timed with the feel good moment when most new presidents have that initial surge of most popular support within the first few months after being sworn in, wage reforms and other new bonos and possibly the announcement of the late stage pregnancy of the new first lady for that aw-shucks, teary-eyed, ain’t that sweet moment.

Yeah, Bolivia is the example to copy. A corrupt impoverished narco state with no foreign investment, and minimal mining exports, despite more unexploited reserves than Chile. The madness continues…

So in 7 months, the last step may be in place with the Apruebo of this shameless sham new Magna Carta.

I hope Chile loses its place for the World Cup at the end of the month. The people need to stop focussing on bread and circuses, pay attention and put a well deserved bullet in the back of the head of this BS highway to hell.

I posted that exact same article about Bolivia on another platform for us deplorables haha.

As for the other stuff, keep yourself diversified internationally… lessens the blows of local stupidity.

Its cool. This is just another poison pill

Faced with this, the Convention of the Constituent People indicated that "we have spent 500 years with an economy with an extractivist pattern, where we are used to being the ones who deliver the raw materials for the first world and they are the ones who industrialize and limit our freedom of power. decide sovereignly.

You see it was 30 cents, then it was like no no…30 years!!! Now it has become 500 years. All we need is chilean morpheus and an underground rave. This just keeps expanding into greater and greater delusions of oppressive grandeur.

But then it gets better…

We have been exploited, we have been subservient. At what point are we going to give ourselves the possibility as a country to say: we can open another path with autonomy, with sovereignty, with free determination”,

Bahahaha. That sounds like a psyche up/wind up for whatever is going to follow. All aboard the train of vitriole and bullshit! All aboard!!

But never would one think “ah yes, clearly communism is the ONLY answer to all of this 500 years of near continuous hell! Hell i tellz ya! Yes surely communism is the path to autonomy and free determination” What in the actual…?!?

This reminds me of children in kindegarten that find out not every child in the world has enough food to eat every day and its been like that for hundreds…nay thousands of years🤯
So the well meaning but hapless kindergarteners decide to organize a worldwide icecream distribution drive to give every child on earth 1 pint of ben and jerrrys every day. It will be financed by the herds of unicorns that can be found in wild herds across all the continents of the earth. The unicorns will have to make the pickups and delivery from the now nationalized nay globalized icecream factories. Oh ffs…

Looney rambling of the day.

Soooo, it was supposedly the Mormon church (USA CIA

) that financed the bus trips of illegals from the north to Estación Central, Santiasco.

What if, just what if the US Deep State is actually for leftist chaos in Chile?

Like I surmised in another post. What gave Chile its strength compared to the rest of the continent? Its independent relatively well-managed currency once a proxy for the price of copper (exception Peru whose currency chart appeared even more stable over the past decade till commie Castillo). What does the US Empire use to control the world? Its world reserve currency. What do all the basket case examples in Ibero-America have in common. Weak currencies and reliance internally on the USD as a secondary currency if not the currency of the country like in (“Bolivarian”) Ecuador or Panama.

So in these decades of no more ideological cold war and China under the cross-hairs (Chile’s main trading partner surpassing the USA a decade ago), a strong currency state (usually reflecting a “robust” economy) trading with the main enemy of the international corporate state of America should be brought down a couple of pegs just out of spite because they can especially even more amusing if done via CIA narco-terror assets who are also tools of the São Paulo Foro with idiot states like Venezuela and Cuba as cover to muck up the trail.

Boric and Co will go ahead, despite the warning from BHP. They don’t care how much increased royalties will affect private mining because they want to nationalize the Copper industry - again.